Christmas day, in this case, meant it was time to separate Ted from the ewes. Not much of a Christmas present for Ted, but he’s led a pretty sweet life around here since October, so I don’t think he really has much room to complain.

Sheep don’t do well by themselves.  Any group of sheep less than three isn’t really particularly happy, and a lone sheep is just a little bundle of panic and misery on hooves.  Lucky for Ted, he’s not our only ram, and he’ll have plenty of company.  On the other hand, he’s never been in with our other two rams, Bill and Freebie, visible in our first photo above.

Introducing unfamiliar rams requires a lot of care.  Rams and roosters have a lot more in common than most people realize.  Throwing two strange rams in a space with each other can easily end just like a cockfight, unless you’re very careful to make certain they can’t do each other too much real harm while they work out their new pecking order.  When you throw one strange ram in with a group who already have things worked out, you have to be doubly careful, since he’ll automatically be outnumbered.

The biggest key is limiting their space.  They are going to do their best to beat each other no matter what you do.  However, if you don’t give them enough room to back up and get a running start, you cut way down on the amount of damage they can do. Second, everyone has to be in excellent shape before you put them together.  Ted lightly sprained a hock Thanksgiving week, and we waited a solid three weeks after he stopped limping before rearranging things.

We’re in the middle of completely reworking our pens and paddocks this winter, so the corner above is one of the sturdiest we have right now.  However, at 8×16 that pen is far too large to be even remotely safe for them.  As soon as we got Ted separated from the ewes and into the pen with the boys, the first thing we did was push all three back into the back corner and rig the cattle panel “gate” to cut the pen in half.  At 8×8, it was still a little to big for our taste, but it was the best we could give them.  We checked all the corners, reinforced a couple, gave them a fresh square bale and fresh water, and got the heck out of the way.

Thankfully, it was enough.  Ted and Bill got one solid hit in before we got them all pushed back, and you could feel it through your feet on the ground.  In the 8×8 pen, they only had room enough for about two steps before they made contact; after a few frustrated minutes figuring that out, they shifted to standing next to each other and knocking each other sideways in the ribs, while Freebie stood in the other corner and got in cheap shots whenever he could manage.

Healthy rams are quite capable of doing that all day – and they will, guaranteed, until they sort out the new chain of command.  They kept a running low-key brawl going all Christmas day, with us popping out frequently to check on them.  In fact, they were going half the night after – our pens are set up about fifty feet outside the bedroom window where we can keep an ear on things in the winter.

By morning, they had it largely sorted out.  Bill had one knot on his head, Ted (somewhat to our surprise) was our very tired new lead ram, and Freebie appeared to have escaped the melee completely unscathed.  They spent the morning of the 26th standing in separate corners, watching each other mistrustfully.  By afternoon, hunger won out, and they were grudgingly sharing their fresh bale of hay. 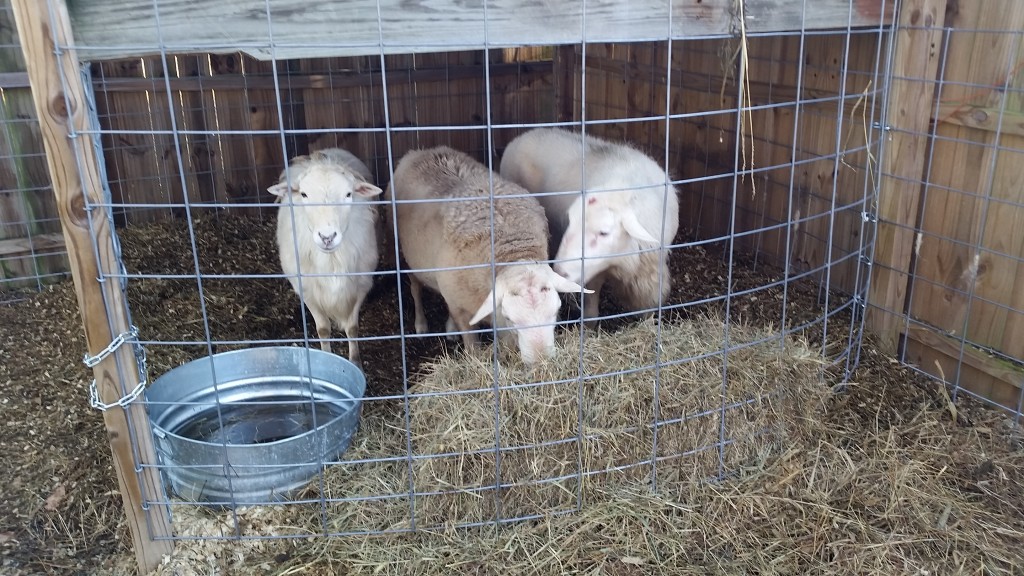 Freebie, Ted, and Bill, a day and a half after putting them together.

No broken bones, no one limping, and everyone healthy.  That’s a successful introduction with these guys.

Everyone stayed wary all weekend, but there wasn’t much in the way of further argument.  They were all too tired, which is a good thing.  A worn out ram really doesn’t start any more trouble.  By Sunday before sundown, they were all full of hay and napping, with Bill passed out on Freebie’s back. 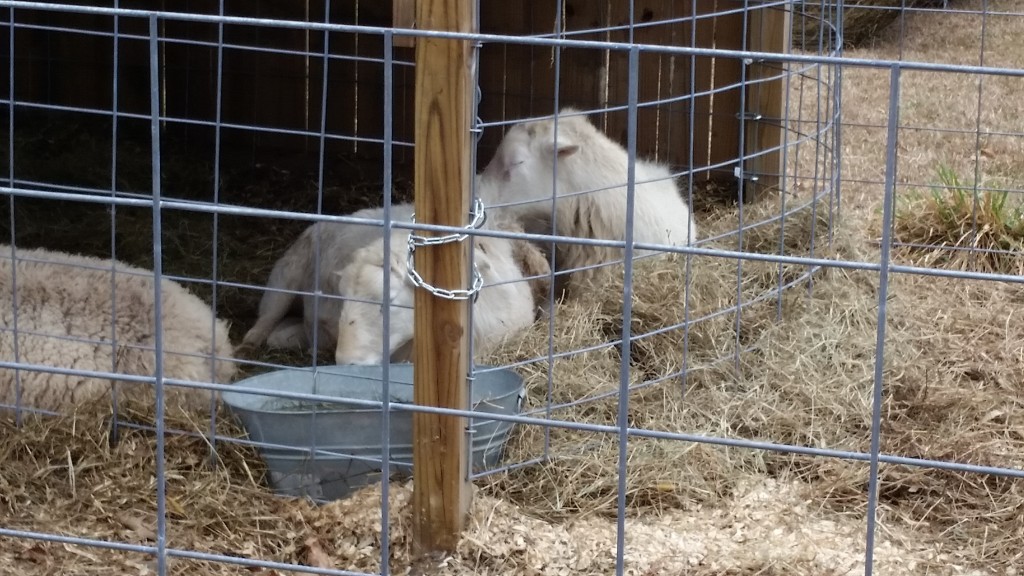 The ram flock, four days after putting them together.

By this morning, everyone had finally relaxed enough to give them their full 8×16 space back for now.  They thought about taking advantage of the room for about thirty seconds, decided it wasn’t worth the trouble, and within five minutes they were all tucked into a big pile of fresh hay.